The development of human language plays a complex role within this process of adaptation. It seems to have developed from signalling among social animals; but I propose the thesis that what is most characteristic of the human language is the possibility of storytelling.

It may be that this ability too has some predecessor in the animal world. But I suggest that the moment when language became human was very closely related to the moment when a man invented a story, a myth in order to excuse a mistake he had made – perhaps in giving a danger signal when there was no occasion for it; and I suggest that the evolution of specifically human language, with its characteristic means of expressing negation – of saying that something signalled is not true – stems very largely from the discovery of systematic means to negate a false report, for example a false alarm, and from the closely related discovery of false stories – lies – used either as excuses or playfully.

If we look from this point of view at the relation of language to subjective experience, we can hardly deny that every genuine report contains an element of decision, at least of the decision to speak the truth. Experiences with lie detectors give a strong indication that, biologically, speaking what is subjectively believed to be the truth differs deeply from lying. I take this as an indication that lying is a comparatively late and fairly specifically human invention; indeed that it has made the human language what it is: an instrument which can be used for misreporting almost as well as for reporting.

To tell a story is to throw shadows to the fire. In that very instant, everything that the word reveals is consumed by silence. Only those who pray given their entire soul know the meaning of that burning, that fall of the word into the abyss.

Illustration based on a Buddhist image.

I am not making a plea for the art I practice. The novel, storytelling in general, will always be able to take care of itself. […]

Storytelling can take care of itself. Is it true? Have censors been so ineffectual, century after century? Yes, they have. They are ineffectual because, in laying down the rules that stories may not transgress, and enforcing these rules, they fail to recognize that the offensiveness of stories lies not in their transgressing particular rules but in their faculty of making and changing their own rules. […] Because (I parody the position somewhat) a story is not a message with a covering, a rhetorical or aesthetic covering. It is not a message plus a residue, the residue, the art with which the message is coated with the residue, forming the subject matter of rhetoric or aesthetics or literary appreciation. There is no addition in stories. They are not made up of one thing plus another thing, message plus vehicle, substructure plus superstructure. On the keyboard on which they are written, the plus key does not work. There is always a difference; and the difference is not a part, the part left behind after the subtraction. The minus key does not work either: the difference is everything.

Storytelling (let me repeat myself at the risk of boring you) is not a way of making messages more –as they say– ‘effective’. Storytelling is another, an other mode of thinking. It is more venerable than history, as ancient as the cockroach. Nor is this primitiveness the only way in which stories resemble cockroaches. Like cockroaches, stories can be consumed. All you need to do is tear off the wings and sprinkle a little salt on them. They are nourishing, to a degree, though if you are truly looking for nourishment you would probably look elsewhere. Cockroaches can also be colonized. You can capture them in a cockroach trap, breed them (quite easily), herd them together in cockroach farms. You can put pints through them and mount them in cases, with labels. You can use their wings to cover lampshades with. You can do minute dissections of their respiratory systems, and stain them, and photograph them, and frame them, and hang them on the wall. You can, if you wish, dry them and powder them and mix them with high explosives and make bombs of them. You can even make up stories about them, as Kafka did, although this is quite hard. One of the things you cannot –apparently– do is eradicate them. They breed, as the figure has it, like flies, and under the harshest circumstances. It is not known for what reason they are on the earth, which would probably be a nicer place –certainly an easier place to understand– without them. It is said that they will still be around when we and all our artefacts have disappeared.

This is called a parable, a mode favoured by marginal groups – groups that don’t have a place in the mainstream, in the main plot of history – because it is hard to pin down unequivocally what the point is.

Illustration inspired by a drawing of a rhinoceros from the Chauvet Cave, France

Telling a story is not like weaving a tapestry to cover up the world, it is rather a way of guiding the attention of listeners or readers into it. A person who can ‘tell’ is one who is perceptually attuned to picking up information in the environment that others, less skilled in the tasks of perception, might miss, and the teller, in rendering his knowledge explicit, conducts the attention of the audience along the same paths as his own.

Illustration based on a Buddhist image

Myth is a language made of timeless, not of momentary, forms. The themes [of performance improvised by Haida storytellers for anthropologist John Swanton] are not concocted for this occasion. They are original in a different sense. They are thousand- or ten-thousand-year-old stories put to current use; they renew the present world by rehearsing what is known of how the world came to be.

Robert Bringhurst, A Story as Sharp as a Knife: The Classical Haida Mythtellers and Their World, Vancouver: Douglas & McIntyre, 1999: 220

Inspired by the drawing of a shield found in a Greek vase. 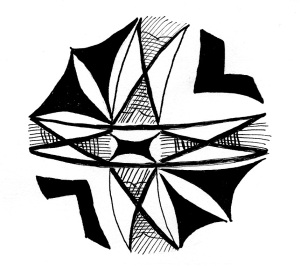 I think that an interest in storytelling is part of our way of being in the world. It comes from our need to understand what has happened, what people have done, what they may do: the dangers, adventures, trials of all kinds. Where are not like stones, immobile, nor are we as flowers or insects, whose lives are preordained. We are beings for adventure. Man will never be able to give up listening to stories.

Illustration inspired by the ceramic bowls of the Hausa people (Nigeria).

The intellectual nature of a story is exhausted with its text, but the functional, cultural, and pragmatic aspect of any native tale is manifested as much in its enactment, embodiment, and contextual relations as in the text. It is easier to write down the story than to observe the diffuse, complex ways in which it enters into life, or to study its function by the observation of the bast social and cultural realities into which it enters. And this is the reason why we have so many text and why we known so little about the very nature of myth.

Illustration inspired on engravings from a cave in the island of Götland.